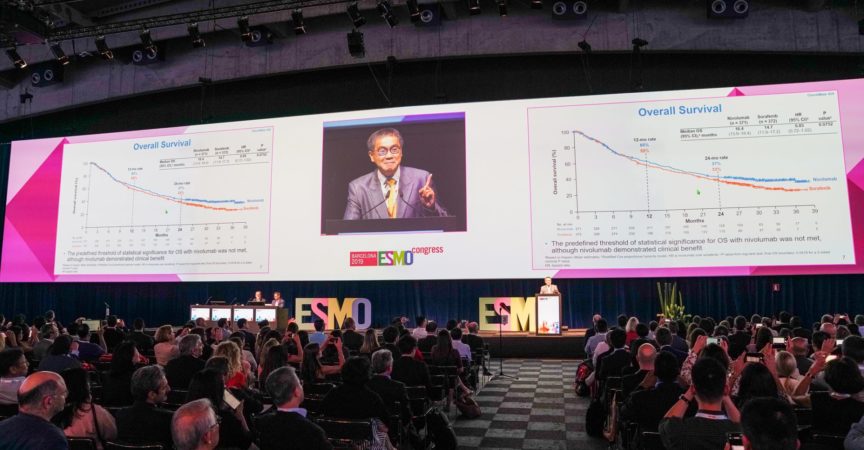 Data from the CheckMate 459 study show a trend towards clinically meaningful improvements in survival and response rates, as well as a favorable safety profile with first-line immunotherapy compared to current standard treatment for advanced hepatocellular carcinoma (HCC).

The study did not reach its prespecified primary endpoint of improved overall survival (OS), however, it showed trends towards improvement of overall survival and response rates, as well as a favorable safety profile.

The phase III trial randomized 743 patients with advanced HCC to first-line treatment with either nivolumab (n=371) or the standard treatment sorafenib (n=371).
In the analysis now presented, median OS was 16.4 months for nivolumab, and 14.7 months with sorafenib (HR: 0.85; 95% CI: 0.72–1.02; p=0.0752). This did not reach the predefined threshold of statistical significance, however, clinical benefit was observed across predefined subgroups of patients, including those with hepatitis infection and those with vascular invasion and/or extrahepatic spread.

The overall response rate was 15% for nivolumab (including 14 patients with complete response), compared to 7% for sorafenib (5 patients with complete response).
Grade 3/4 treatment-related adverse events were reported in 22% of patients in the nivolumab arm (81 patients) and in 49% of those with sorafenib (179 patients). These led to discontinuation in 4% (16) and 8% (29) patients, respectively.

Study author Dr. Thomas Yau, University of Hong Kong, China, deems these results nevertheless relevant as there have been no significant advances over sorafenib in the first-line setting in more than a decade. He added, «HCC is often diagnosed in the advanced stage when effective treatment options are limited. The encouraging efficacy and favorable safety profile seen with nivolumab demonstrates the potential benefit of immunotherapy as a first-line treatment for patients with this aggressive cancer.”

Yau acknowledged that the study did not meet the predefined threshold for statistically significant improvement in overall survival. However, he emphasized a clinically meaningful overall survival benefit, which is particularly effective considering the high frequency of subsequent use of systemic therapy, including immunotherapy in the sorafenib arm. In addition, he stated that there was a higher complete response rate with nivolumab compared to sorafenib. Patient reported findings, furthermore, suggested that patients in the nivolumab arm experienced better quality of life, and further supported clinical data that demonstrated a treatment benefit for nivolumab versus sorafenib in advanced HCC.

Easy choice between nivolumab and sorafenib if confirmed

Commenting on the relevance of the CheckMate 459 data, Dr. Angela Lamarca, Christie NHS Foundation Trust, Manchester, UK, said, «In view of the fact that the study did not meet the predefined threshold of statistical significance for its primary end-point (overall survival), these results are unlikely to change the current standard of care. However, it is becoming more apparent that immunotherapy could have a role for the first-line treatment of advanced HCC and the differences in response rates are clinically meaningful.” She was disappointed that the higher response rate with nivolumab did not translate to improved progression-free survival or overall survival.

However, Lamarca stated that the favorable safety profile with nivolumab was of relevance that became apparent in the form of less toxicity-related treatment discontinuation with nivolumab. She stated that the potential impact on patients’ quality of life is also important. «In a hypothetical scenario in which both options (sorafenib and immunotherapy) were available and reimbursed, and if quality of life was shown to be better with nivolumab (because of the better safety profile compared to sorafenib suggested in this study), clinicians and patients may favor the option with a more tolerable safety profile”. She concluded highlighting that this study did not meet its primary end-point and therefore conclusions were to be made cautiously and also that the high cost of immunotherapy could not be ignored.

Lamarca noted that the well-designed study had two possible limitations, namely the unselected population and the predefined threshold of statistical significance. Results suggested patients with high PD-L1 had an increased response rate only in the nivolumab arm suggesting its potential role as a predictor biomarker; but she said, «More research is needed to better understand how to select patients for immunotherapy. PD-L1 looks promising in this study but we need a more reliable marker to select patients who will derive benefit.” «The lack of a reliable biomarker may have contributed to the study’s failure to show improved overall survival with immunotherapy,” she suggested. «In addition, the study design with a ‘high’ predefined threshold of statistical significance is generating confusion in the community with potentially beneficial therapies generating statistically negative studies.”