AACR 2019: 91% of patients with marginal zone lymphoma respond to umbralisib 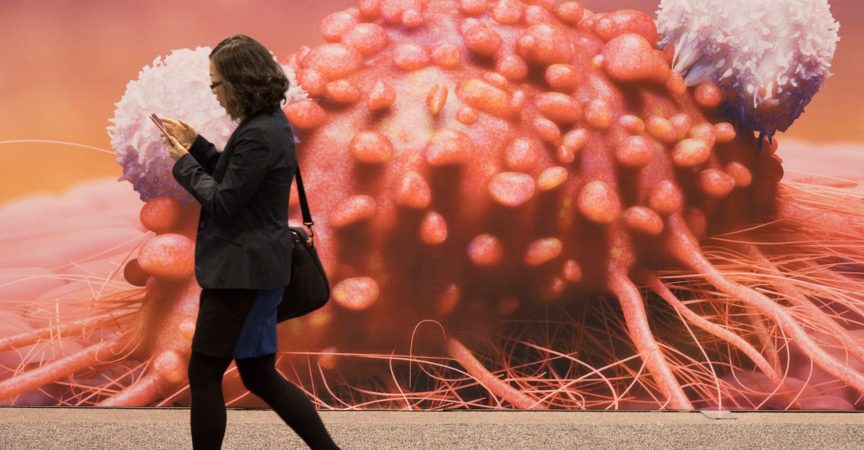 Umbralisib, a small-molecule inhibitor that targets PI3K-delta, is safe and efficacious for patients with relapsed/refractory marginal zone lymphoma. This an interim analysis of the phase II clinical trial UNITY-NHL presented at AACR 2019 shows.

Marginal zone lymphoma is an uncommon, slow-growing form of non-Hodgkin lymphoma. The disease is commonly treated with rituximab, either alone or in combination with chemotherapy. However, in most instances the disease relapses, leaving patients with very limited treatment options. Umbralisib is a small-molecule, oral inhibitor of PI3K-delta that also inhibits other signaling pathways, such as CK1-epsilon. In January 2019, the FDA granted umbralisib breakthrough therapy designation or the treatment of adults with marginal zone lymphomas after at least one CD20 therapy.

First author Nathan H. Fowler, MD, associate professor of medicine and director of clinical research in the Department of Lymphoma/Myeloma at the University of Texas MD Anderson Cancer Center in Houston presented data of an interim analysis of the UNITY-NHL phase II clinical trial at AACR Annual Meeting. The clinical trial enrolled 69 patients with relapsed/refractory marginal zone lymphoma who had received a median number of 2 prior systemic therapies. Patients received 800 milligrams of umbralisib orally once daily until disease progression or unacceptable toxicity. At data cutoff date, 38 patients had at least 6 months of follow-up. In this group, 4 patients had a complete response, and 17 had a partial response. 11 patients had stable disease. The clinical benefit rate (CR, PR and SD) was 84 percent, and 91 percent of patients experienced tumor reductions. The progression-free survival after 12 months was 71 percent. The median time to initial response was 2.7 months, the median duration of response was not reached.

The most common adverse event of any grade was diarrhea, which affected 45 percent of the 38 patients. The most common grade 3/4 adverse events were neutropenia, febrile neutropenia, and diarrhea, which affected 8 percent, 5 percent, and 5 percent, respectively. No events of colitis or pneumonitis that have been described for the substance class were reported.

»The adverse event and clinical activity data are highly encouraging at this early timepoint,” Fowler concluded. »We are excited to continue following patients for a longer time to further establish the long-term activity and side effects of umbralisib. With the results reported so far, umbralisib has the potential to make a real difference for patients with relapsed/refractory marginal zone lymphoma.”

According to Fowler, the main limitations of the data are that it was based on a small number of patients and a short follow-up time.